Check it out, bad card games

Don't you miss the gripping thrill of playing hokey blockey games on a computer without an internet connection? I thought so. Here's a list of my silly card games that run on modern computers but look as if they've lurched straight out of a late-nineties grey-on-teal-fest.

In about 2013, the tile game 2048 suddenly became popular. Because I'm extremely lazy I won't describe it here, but it's fun and you should play it now. 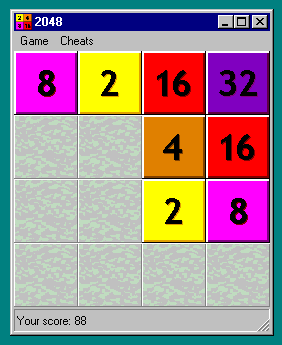 This is apparently how toddlers play card games. In Dada Cards, everyone is a winner! I haven't gotten around to making a "score" function yet, but hey, you don't need external validation when playing any single-deck card game imaginable in the universe, do you?

Probably every computer science student's first project is to implement Conway's Game of Life. Well, here it is in Visual Basic 6.

Uh, okay, that was it. Hope I win the webmaster's award!